Fires have always been the most deleterious things, taking a toll on everything from life to property to business and even to the victim’s health. But, with the advancements of technology, the field has become advanced to where fire alarm systems, smoke detectors and other devices are having a thing.

They have become part of today’s life-safety system, warning people before anything happen.

But, if you are not even ready to plunge in installing a fire alarm system, knowing its fundamentals will help you for future events. Some of the common things include knowing about pull stations, how to disarm the control panel, troubleshooting heads, horns, zone wiring and much more.

Fire alarm detectors are of many types- from intelligent smoke detectors to the manually operated ones to sophisticated smoke detectors.  So, we have divided them into different groups; the most common one is:

Fires only take few seconds to become uncontrollable, with flames reaching heights of 1000 degrees Fahrenheit. However, the good news is that you can control these fires with a heat detector.

As the name suggests, a heat detector is a device that automatically senses the heat of the room and alerts the property owners that there’s a fire.

Smoke detectors are another important safety device that decreases your chance of having house fires.  They give you early signs of fires so that you can stay safe. Smoke detectors sense fires as per their detector. For instance, a photoelectric model comes with a light source that helps in detecting smoke.

When the smoke enters the detector, it makes the light reflect on the sensor causing the alarming sound. In fact many fire extinguisher services personals suggest that smoke detectors are best for the fires, which cause smoke before coming into flames.

Carbon monoxide is a silent threat that happens by burning carbon fuel like natural gas or gasoline. CO, Carbon Mono-oxide is an odorless, colorless and toxic gas that is hard to detect without sensor.  While these are not dangerous when burnt in open areas, but for confined spaces, the CO gas can lead to death.

The common symptoms of this gas are headache, vomiting, dizziness, fatigue and more. However, the carbon monoxide detectors help to prevent Co poisoning.  This detector comes with an electrochemical cell that senses carbon monoxide only, not smoke and other gases.

It is one of the most sophisticated types of alarm system that is installed in public premises allowing everyone to hit the alarm in case of fires.  The alarm is activated either automatically or is initiated by a detector.

Previously, the glass break detectors were the only means of having the fire alarm system.  Some of the common requirements of having a manual call point are that the MCP should be of a break-glass type to protect the accidental operation. It should also have a key-operated facility for periodic testing.

These detectors are best in detecting smoke, heat and carbon monoxide. These are used to reduce false alarms by directly comparing the inputs from the different sensor before deciding whether its actual fire or any other smoke.

Multi-sensor detectors can also replace the existing smoke detectors and are the first choice for installing in the buildings.

Another Type Of Fire Alarm Systems:

While the above mentioned are the most common type of alarm systems, some are also classified as below:

So, now that you know everything about smoke detector, bring them in your lives and stay safe! TikViral: A Few Elements That Make TikTok Crucial For Businesses 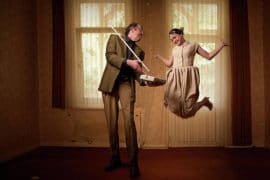 Fun Learning Activities for Kids You Can Do at Home